Our research focuses on charactering the structures of macromolecular machinery in their cellular context using three-dimensional (3D) cryo-electron tomography (cryoET) and correlative light and electron microscopy (CLEM). Structures of intracellular macromolecular complexes are usually heterogeneous and dynamic, relying largely on interactions with other cellular components.  Using cryoET to determine the structure of cellular machinery inside the cell avoids damage to the complexes during purification, captures snapshots of the complex while in action, and provides information on cross-talk of the complexes with their cellular partners during biological processes. Our current research interest includes:

Huntington's disease (HD) is an inherited neurodegenerative disease characterized by progressive motor, cognitive, and psychiatric deterioration. In HD neurons, the formation, abundance and persistence of mutant huntingtin (mHTT) aggregation species are correlated with neurodegeneration, however, the identity of toxic species and the structural basis for mHTT toxicity are not clear. Multiple cellular pathways have been implicated in the pathogenesis of HD, including protein homeostasis, calcium signaling, mitochondrial dysfunction, and vesicular transport and recycling. Using cryoET to directly visualize mHTT and cellular components involved in these cellular pathways will provide insights to HD pathogenesis and potential therapeutic targets. 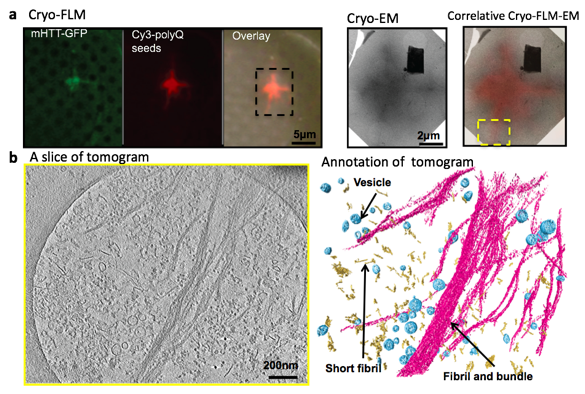 The incidence of invasive fungal infections associated with the funal pathogen Candida glabrata has increased in the United States in recent years (1). Echinocandin drugs have become a front-line therapy against Candida spp. infections (2). They target the fungal-specifc enzyme β-(1,3)- glucan synthase (GS) located in the plasma membrane which catalizes a major component of the fungal cell wall. Resistance to these drugs is an emerging problem and comes from mutations in the catalystic subunits (Fks1/Fks2) that make up the enzyme targetted by echinocandins (3). To date, the GS enzyme complex has not been purified to homogeneity and there is little structural information available (4), therefore, direct structural information is needed to better understand GS as a major biosynthetic apparatus for the cell wall and as an important drug target.

Plasma membranes from C. glabrata were isolated following a previously described procedure (5), vitrified and then imaged by CryoEM Tomography (6). Tilt series were processed by frame alignment and 3D construction softwre; avergaing was done by EMAN2.

Tomogram and a closer view reveals abundant homogenous ring-like structures embedded in the plasma membrane in clusters, as well as suggest 6 subunits in the structure. Subtomogram averaging with C6 symmetry reveals more information about the structure: overall size, the presence of a pore, as well as symmetry consistent with topology modesl of yeast GS and ring-like structures (7). Furture proteomics research on plasma membrane protein and immunolabelling will be conducted to identify the protein.

Figure 1: Data analysis of ring-like structures A) Slice view of tomogram B) Zoom-in view of subset in A C) Top, side, and bottom view of subtomogram averaging after C6 symmetry applied

While the physiology of diatoms' photosynthesis has been studied extensively, the strucutral and molecular details of thylakoid membrane architectural organization and the spatial distribution of its constituents are largely unknown. In order to addredd these knowledge gaps, we've developed a coherent, interdisciplinary paradigm which integrates strucutral biology, biophysics, and proteomics. Using similar 3D modeling techniques in our other projects, we aim to gain a deeper understanding of four protein complexes: PSI and PSII, Cytochrome B6F, and ATP synthase. These complexes constitue the photosynthetic machinery that supports the robust photophysiology of diatoms and their responses to changes in the environment.

In our preliminary results, we've characterized the strucutral profiles and elucidated the spatial distribution of all four target complexes in the thylakoid membranes of a marine diatom Phaeodactylum tricornutum by use of CryoEM tomography in conjuction with biochemical and biophysical tools. Our structural analyses have revealed that PSII exists in two populations: loose clusters of complexes associated with antenna proteins, and compact 2D crystalline arrays of dimeric cores. 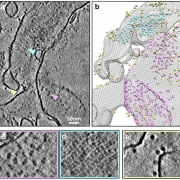